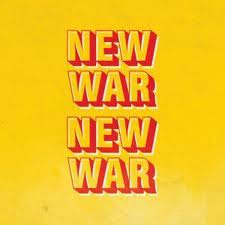 It was late in 2010 that New War turned up as a pulsing glob of bright light on the local music radar. On a Tote Hotel bill that featured a couple of other brand new outfits that would go on to relatively big things (notably Lower Plenty and Harmony, both of whom have albums out and more on the way) New War exploded onto the stage and seized the status of ‘a band to watch in 2011’.

We watched them build a support base in a relatively short period of time and we waited for an album (or at least rumours thereof) to surface. They teased us in September with a sexy-as-shit release of their single Ghostwalking on 12” vinyl and we held out through summer in the hope that the album (of which rumours were now circulating) would hit us before the winter crept in. It wasn’t like it was a bad time, great music was sprouting up all around us – Dick Diver, Lost Animal, Royal Headache, Harmony, Lower Plenty et al managed to release exceptional albums in the interim – but still we waited, knowing full well it was going to be special, for New War to follow up what had now become incredible live performances with album number one.

It turns out the record was ready to go a while back. The self-titled debut struck a few minor hurdles but is finally ready to drop via US label Fast Weapons and Local imprint Sensory Projects. “There were big delays with Ghostwalking and it ended up [that], by the time it came out, there was too little of a window to put out a record,” says a remarkably softly spoken New War frontman Chris Pugmire (remarkable given his stage presence and howl). “We didn’t want to just smash ‘em together ‘cause we didn’t want Ghostwalking to just get lost. So we decided to delay it a bit.” Bassist Melissa Lock adds, “Then our keyboardist was having a baby, so we couldn’t put it out then ‘cause we wanted to promote it.” Though Pugmire reckons it may’ve been a blessing in disguise given the quality and quantity of Australian releases in 2011.

New War emerged out of the musical partnership of Pugmire and Lock, which developed in the USA a few years back when they were playing in a band called Shoplifting. Lock describes a nostalgia for the way the “old Melbourne” music world was as integral to her pursuing something different in the States. “When I left [Australia] it was very rock dominated, like Legends Of Motorsport, and I wanted to do something a little bit different,” she continues. “I missed the old Melbourne and what was going on and I was really looking for a different thing. When I came back, I was like ‘Oh my god! There’s such amazing music!’ I was so glad to be back in Melbourne, it was an exciting time to start playing different kinds of music and we purposefully left out the guitar – I was like ‘I don’t want to play with guitar, let’s think of something different’... As much as I love the guitar and guitar music, I just felt like I wanted to do something different and let’s just see what it would sound like taking the guitar out and what could we do with it? If we put the guitar in, I thought we’d be just another rock band.”

On arrival back in Australia, the pair had the basis of some songs penned. The sonic direction of the thing (whatever the ‘thing’ was destined to become) lay in a basis of dub and a fiendish love of bass. Pugmire’s abstract lyrics would become the centre of whatever it was they would do; the rest fell on the selection of the players they’d combine with and those decisions were made on more of a personality level than necessarily a musical one. “Me and Chris had written songs together,” continues Lock, “so we already had a bit of an idea of what we were wanting before the others came along. Now we’re a full band where we all have total control and everyone’s kind of brings in ideas, which is exciting for the next batch of stuff.”

Another shift for Pugmire was to tone down the level of politically-focused lyrical content. Where his work with Shoplifting had been dripping in “gender politics and was involved in the Kill Rock Stars kind of Pacific Northwest super-political scene”, New War takes a more lateral approach. Though the content still bubbles with concepts of the inner-workings of power, the often bleak vocal lines pulse with a more personal longing. “It’s kind of like lots of intertwining short stories,” says Pugmire of the narrative thrust of the album. “It’s lots of weird kind of historical and current events that I’m obsessed with for one reason or other.

“Calling From The Inside is actually about where I’m from. There’s this inlet that’s called the Puget Sound, that comes out from the ocean and Seattle comes right up to the water there. There were some rivers that ran off of it and they’ve all been covered over. It’s kind of this ghost story of colonisation and almost a homesick song as well... Seattle has totally disappeared due to gentrification. It doesn’t even really exist; the Seattle I grew up in, it isn’t there anymore.”

Through the dense, often despairing, lyrics (“oxidised by a dead sea scene/I’m killing in a solar daydream/silted in a sea dredged dry/carboned out in a junked up sky” – Slim Dandy) the coursing rhythms and vivid keys actually evoke ecstasy more willingly than sorrow. It’s a complex listen, rewarding, and as close to the live New War sound as the band could capture.

“I think Lindsay [Gravina, producer] was keen on getting as much of the energy of the live show, obviously you can never exactly capture that in any kind of recording. All the instrumentation was done live. We weren’t into the idea of separating the instruments and recording them separately,” says Pugmire of the process. “We tried to create similar moods, and get ourselves into similar headspaces and similar aggression – we tried to keep it as how we feel when we play. We tried really hard to keep that and Lindsay did an amazing job,” says Lock.

Though enthused about the release, Pugmire and Lock are more so buzzing on the community they find themselves a part of. There’s no doubt in their minds that we are experiencing something special in Australia. “We’re so lucky,” says Lock of the support they’ve received from community radio (PBS and RRR both airing live performances from the band even before the sniff of an album). “It’s so much harder to get on radio [in the US]. College radio is something I never really understood... It made me very proud that we’ve got such great support for local artists.” And they’re surrounding themselves with these artists at their local and interstate launches – veritable showcases of what’s hot. “Being here now reminds me of growing up and going to shows in Olympia and Seattle,” says Pugmire. “It’s not as wild or punk or whatever, but there’s just as much of an exciting array of music going around.”

Posted by Samson at 7:33 PM No comments:

Rick Froberg is a name synonymous with the Southern Californian punk scene of the last two decades (the good San Diegan scene, not the poxy pop-‘punk’ of a nearby city at the same time). During this period he contributed vocals and guitar to hugely influential outfits Hot Snakes, Drive Like Jehu and Pitchfork, amongst others, but he also contributed to the aesthetic of the ‘movement’, producing album art for label Swami (created by fellow Hot Snake John Reis), which included cover art for bands like all mentioned above, Reis’s hugely successful Rocket From The Crypt and Beehive & The Barracudas. 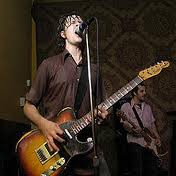 When Hot Snakes entered the millennium with album Automatic Midnight, it took a hose to the shitty washed-out weasel piss that ‘punk’ had been diluted to and finally washed it down the toilet where it belonged. Obits continue in a similar vein – they’re not rewriting the rock’n’roll rule book by any stretch, and though the attitude is less confronting, their sound similarly conjures a time and place. Nowadays Froberg lives in New York City, a world away from the relatively sleepy northern counties of San Diego where he grew up. As a successful artist (both musical and visual), based in one of the true global arts hubs, it seems this rocker has landed on his feet. When I offer that he’s basically living out my rock’n’roll fantasy, he dryly offers, “I’ve only been this so I don’t know what it is to be anything else. I guess it’s goin’ okay, I’m still here.

“It’s a balance,” he says of his lifestyle. “Visual art is also my job. Some of it could be considered commercial art y’know, where I work and I try to get paid enough together to pay the rent. As much as I can, I like to do music because I get to travel and I get to play and drink beers with my friends and what not.

“We’re not that promotion-oriented, we don’t go out on tour to promote ourselves, we go out on tour to have some fun and take advantage of it... We do this because we want to and because it’s fun. This isn’t professional, it’s maybe semi-professional, I don’t make enough from this to pay for my life and neither do most of the people I know who play in bands... I get to travel, I get to go to Australia, I get to meet people and most of all I get to play my crappy rock’n’roll music and have a good time.”

Given Obits’ sound isn’t a million miles from that of his earlier bands, I query how much of an impact living in NYC has had on his writing and art? Is it quantifiable how much of an impact surroundings can have on an artistic pursuit? “It would be difficult to do,” he considers after a long pause. “I could quantify really obvious things, like I moved from a smaller town to a much bigger town and in a smaller town you know most of the people who are involved, intimately or at least casually, whereas here you don’t. What we do has much less value here because there’s so much of it – there’s so many bands and so much entertainment’s competing for your attention. It’s more anonymous in some ways, it’s a very urban environment and that affects how you see things and your aesthetics. If you move from Alice Springs to Sydney or something, it probably wouldn’t be the same experience, but it’s just a different thing.”

In terms of inspiration, music-wise the basic tenets are similar for Froberg now as when he was cutting his teeth with Reis way back when. Obits aren’t out to change the world, just to play some rock music. “I think the same principle always applies,” he says of his drive to continue, “it’s about self expression and it’s about fun and getting off your arse and seeing things.”

Posted by Samson at 7:30 PM No comments: