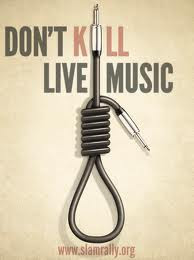 On 23 February 2010 the Victorian public marched to the steps of Parliament House in a 20,000-strong show of support for a live music community under threat. Organised by grassroots group SLAM (Save Live Australian Music), it was the largest cultural protest in the nation’s history. The message was clear: we do not accept that live music is in any way associated with violence and we expect live venues to be treated as the cultural hubs that they are, not lumped in with seedy beer halls and gambling dens by association through alcohol alone. And, it seemed, the government listened. The Live Music Accord was drawn up and, accordingly, an exemption process was established whereby venues could apply to have their ‘high risk’ status lifted, thus relieving the financial burdens associated with security and insurance costs. Also, a peak body, Music Victoria, was set up to oversee and facilitate the implementation of change. Things were looking up... But that was an election year.

With a change of State Government came hope for further progress. In June last year Arts Victoria released a report: “The economic, social and cultural contribution of venue-based live music in Victoria”. For the first time, this report quantified, in economic terms, what live music is worth to Victoria – the contribution is staggering. Politicians jumped on the numbers; there were cringe worthy photo opportunities at the Tote Hotel and grand statements about the ongoing support of live music. The Government acted to change the Liquor Control Reforms Act to take into account the needs of live music in liquor licensing decisions. “It was an election promise and they were under a lot of pressure to do it,” says SLAM organiser Helen Marcou. “When Arts Victoria released their report into live music... we found out for the first time ever that it’s worth half a billion dollars to this state, which is substantial. So [the State Government] came out with a big statement that we want to nurture and grow live music, so they changed the law, but at the same time they slashed a lot of funding – for example to Freeza Central [and] they’ll be reducing funding to Music Victoria in the future.”

A major concern for SLAM in Victoria is that the regular ‘round table’ meetings outlined in the Accord have not been implemented. There has been much progress at a municipal level and there are concerns that the now Ballieu Government is stepping away from the then Brumby Government’s promises. “Ted Ballieu’s Government via [Minister for Consumer Affairs] Michael O’Brien have come out and said [the Live Music Accord] is a commitment from the last government, so they’re not going to go out and revisit that,” continues Marcou. “We think that’s contradictory to the statements made at the Tote on the day of the release of the [Arts Victoria] report into the contribution of live music when they stood up and publically stated ‘we support it, we’re gonna nurture it, we’re not gonna let unintended consequences from regulation affect it again’.”

In recognition of the significance of the sector, Melbourne City Council has written up a Live Music Strategy that has been worked on with various industry stakeholders. “Once you get the City Of Melbourne involved [it’s a] big statement [that] they support live music,” says Marcou. “They’ve put a motion forward to change zoning to protect live music venues... They’ve also started the Melbourne Music Week.” But these positive steps are in danger of being undermined by a State Government reluctant to talk at all. 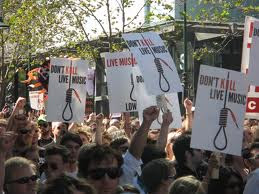 One key discussion Marcou and her round table delegates are keen to have centres around the increased density of housing in the inner suburbs and how best to protect existing venues from noise complaints from new occupants. “Our major concern is always first amenity: that people can move in next to us, complain and get us shut down,” says Fitzroy’s Old Bar owner, and musician, Joel Morrison. Old Bar plays an integral role in the music community as one of the few venues that shows live music – largely smaller, emergent artists – seven nights a week. “There’s a certain decibel reading that you’re allowed and that’s measured from the closest residence. If somebody moves in right next door, then your closest residence, which may’ve been two bloody blocks away, is right next door.”

Marcou believes the implementation of order of occupancy legislation must be clearly defined in statutory law before venues will be protected at all. Without the planned round table discussions, it’s impossible to get the ball rolling on this and other areas of concern, including best practice codes for venues and preventing liquor licensing from impacting negatively on live music in the future. “Planning can be interpreted by different councils,” she says. “High density living is the way of the future but we can’t plan positive culture out of existence.”

SLAM are taking these initiatives to every state and territory in the country by way of a national ‘SLAM Day’ celebration this Thursday. Over 120 venues (including over 60 venues showing more than 130 acts in Victoria alone) have registered gigs in a show of solidarity for a cause. “Part of the reason we have gone national is that after the SLAM rally we’ve constantly received letters and emails from all around the country and other cities around the world asking for help with their own campaigns,” says Marcou. “There’s similar problems of gentrification, land values rising, artists being forced into the peripheries of society, and the same themes of no protection for these cultural clusters.”

As well as entertainment hubs, these cultural clusters form the centre of communities, provide jobs are crucial for the development of talent. Local musician Tom Lyngcoln is a figure synonymous with the local band scene. Not only has he played in bands in Melbourne for years, but he’s the guy lending and lugging gear at small gigs, he’s in the shadows at pretty-well every rock gig in town; he met his wife through music, his friends through music, he lives and breathes what it is to be part of the music community. “The most important part of this community is the live performance,” he says. “It’s the ritual: you get together and you meet; you meet new people, you get to see all your old friends. For me that is social interaction, it’s the foundation of my life.”

For Lyngcoln, the cutting of funding for youth development groups such as Freeza Central could have dire effects for the local scene. “If they said that you can’t drink any more in venues, I wouldn’t give a shit, I’m there for the music,” he continues. “Growing up, that was the thing that was most frustrating to me, I wanted to be in these rooms and see these bands and hear the music and they’d tell me I can’t because there’s alcohol there... My wife Alex and all her friends met through going to all-ages shows and all those people went on to form bands. It’s a no brainer, and something that I’ve realised as I’ve grown older is that constantly playing to your peers is nowhere near as beneficial as playing to younger people who may draw a bit of inspiration from it and get involved themselves.”

The SLAM rally, for Lyngcoln, will remain synonymous with his discovery of political cause and effect. In celebration, he and his band Harmony have signed on for the SLAM Day event, registering a gig at Smith Street venue Yah Yah’s. “As an adult and a voter I’ve never really had any other impact on a decision. I can’t recall any other time that there’s a direct correlation between an action taken and a result given. It’s an extremely powerful movement and it has to keep going.”

This Thursday, whether you make it down your favourite venue, write a letter or call up your Minister, pass some information on to a friend or buy a bit of locally produced music, SLAM Day is about engaging with your surroundings and being part of a community. Even a stroll around your neighbourhood will reinforce what you or potentially stand to lose, or perhaps have already lost. “They’re a soft target, live music venues,” concludes Marcou. “It’s much cheaper to just put on a big telly screen or run poker machines or sexually explicit [entertainment] or just straight drinking than to run live music. People tend to drink less in these venues, they have a cultural focus and it’s a little community that teeters on the edge. We can’t see our culture planned out of existence.” Or as Joel Morrison puts it: “What else are ya gonna do? It’s music, it’s fantastic!”