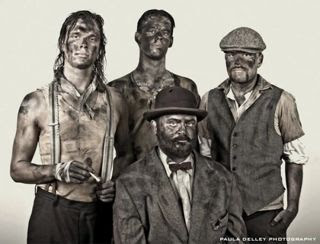 Ah festivals, tossing new musical balls in the air for the discerning punter. We found Sydney’s Snowdroppers (according to the interweb: a person who steals women’s underwear from clotheslines) late one night on the APRA stage at Byron’s Blues Fest and were seduced by the energy of their twisted country-blues-punk performance.
In Abbotsford’s Terminus Hotel, on some kind of promotional sojourn, on-the-spot jogging front man Johnny Wishbone along with string guy Pauly K and percussionist Cougar Jones explain their blues playing tendencies grew by default rather than design. ‘Paul and I were playing in a rock band and were asked to put a few songs together for this burlesque show that our now manager was putting on—possibly the last paid show we did,’ Wishbone tells me. ‘He wanted blues songs and we all listened to lots of blues, so we jumped at the chance to play this music that we were passionate about but had no outlet for.’
‘We’re not strictly blues by any stretch,’ adds Pauly K. ‘There’s definitely pop/rock elements in there and that probably explains why.’
‘We never went into it thinking we’d be a blues band,’ Wishbone continues. ‘We would’ve broken up by now because we’d be bored shitless by twelve bar progressions. We like to think we bring a little accessibility to the blues for those who may not have heard it before.’
There is an accessibility to the Snowdroppers’ sound that comes via the sheer scope of their influences. Classic pub-rock melds with country plucking, with punk abandon and gypsy irregularity. They quote influences as diverse as surf guitar, Delta blues, Chicago swing and Australian hard rock. ‘I was always into The Beach Boys and Kinks’ kind of stuff,’ Pauly continues, ‘whereas Wishbone and Cougar have been more into bluegrass and garage rock. If you can’t do any one thing well, do a few things as best you can—it’s a hit and run strategy.’
The Snowdroppers are all too aware of the implications of venue closures on a local live music scene. Sydney’s Hopetoun Hotel closure was well documented Australia wide and though they remain optimistic that the Sydney scene is as vibrant as it ever has been, there are concerns that the governing bodies simply have no idea what the people want. ‘It’s definitely harder to get out there when the smaller venues close,’ Pauly K continues. ‘There was all this talk in Sydney about loosening up and creating more smaller venues. They laxed it but the licenses are still hard to get. The licensing people’s stance seems to be that “We don’t want to be like Melbourne, sipping chardonnay, reading a book in the corner. We’re Sydney, we like big raucous pubs with sports and Kino, we don’t wanna lose that. It’s culture.”’
‘It’s everything you can get at home, in a larger area!’ adds Wishbone.
Crossing so many genre barriers it’s not surprising their debut album Do the Stomp met mixed reviews. The Snowdroppers remain philosophical that though their vigorous live act is near impossible to capture on record, they’re happy with the outcome. ‘Didn’t Inpress shit on it?’ queries Pauly K. I plead ignorance.
‘I take it [bad reviews] really personally,’ Wishbone admits. ‘Not in a violent way. More like a burn my clothes and cry in the shower kind of way.’
‘The first [album] is always gonna be a strange one,’ continues Pauly K, ‘because it has songs you just wrote and songs you’ve been playing since day one—some you’re excited about, some feel a bit like they’re just along for the ride. We knew it would be difficult to capture the live sound, so we decided to embellish it with stuff we couldn’t do live like horns and strings. Not so much to compensate what it would be lacking, but to take it in a slightly different direction.’
‘Yeah,’ concludes Wishbone, ‘they’re different beasts.’
Posted by Samson at 9:07 PM 1 comment:

Jason Isbell’s voice defies his aesthetic. Not that there’s anything wrong with the bloke to look at, but he’s kind of ordinary. You know? Like the Pixies are the most unassuming folk you’ve ever seen, or Daniel Johnstone—well not really like Daniel, he’s a bit different. More like an ethereal being has leant its voice to an average guy—quite the treat.
And as for Justin Townes Earle, whoa doggy! He’s a beast. He’s a lanky, gangly, awkward lumber of a man, but oh so fuckin cool. With a lineage like his (son of Steve, stepson of Allison Moorer, namesake of country god Townes Van Zandt) you’d expect goodness. Or maybe you’d expect pretence?
What you get with Townes Earle are wonderfully constructed country narratives. Whether you buy in to the myth of the guy (mal-adjustment due to absent famous father a fast-track to criminality and heroin addiction), the tunes are testament to a true talent.
Opener They Killed John Henry brought the freakin’ house down and set the pace for a slightly more rock and roll JTE performance. Isbell backed up beautifully and injected a marvellous vocal harmony element to the songs. It’s a brave man that employs the backing vocals of the likes of Isbell, but Earle seized control and stole the finger picking prize for the night during a stomping rendition of Halfway to Jackson, it was nothing short of jaw dropping.
As a comparison to a largely solo Blues Fest performance at Easter, this night’s show revealed a far less reserved musician and demonstrated clearly the depth and breadth of his arrangements. The level of enjoyment shown by both performers was indicative of two musicians clearly at the tops of their games. Or better still, and hopefully for our sakes, two musicians firmly on the rise.
Posted by Samson at 9:04 PM No comments: