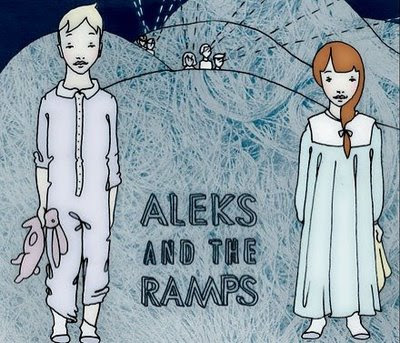 It’s impossible not to be caught up in the tidal rhythms of the opening number 'Destroy the Universe with Jazz Hands', which typically contorts into an electro poppy feast. Typical in an Aleks and the Ramps sense, however, is as far from any traditional song writing as you’ll get. Lingering in the peripheries of so many musical genres, they’re impossible to peg down. 'Midnight Believer' is a consolidation of sorts; it acts as the best explanation of their signature complexities to date. All the while, the feel of the album barely resembles the live incarnation of Aleks and the Ramps at all.
You’re greeted by the delicious inky smells of a classy package, complete with gorgeous cover art and poster by illustrator Lily Coates—once you’ve pulled the disc out there’s not an ounce of plastic in sight. There’s a maritime peg to the arrangements that vanishes for spells but returns occasionally to remind you where you are. There’re crafty little samples in spots, clean acoustic rhythms and the banjo makes its marvellous self known throughout.
Structurally this album lends itself to improvisation and as a basis for a live show it will make fantastic root material. Gripe-wise, all that could be slandered upon 'Midnight Believer' is that it’s a little too short. With the sisterly nature of all tracks, one through ten, it’s an exciting prospect to hear it live, start through finish.
The elemental beauty of this recording lies in the crafted hidden treasures continually darting and enticing. The time taken in arranging may’ve been excessive but the detailing pays off. From moment to moment you’re never quite sure where they will take you next. By definition, this is what separates Aleks and the Ramps from anything else I’m hearing right now. There exists within this outfit the ability to pull (musical) rabbits from hats at every turn. It’s a narrative of sorts but it’s by no means ‘once upon a time... the end.’ More James Joyce than John Grisham, Midnight Believer is the literature of Melbourne music, but in no way inaccessible.
Sam McDougall
Posted by Samson at 6:53 PM No comments: 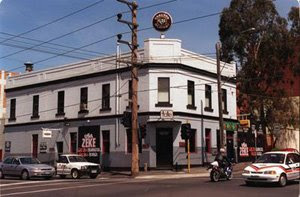 The Tote’s future is unwritten

For more information about the Tote Documentary and a kick-arse trailer go to: www.myspace.com/thetotedoco

Sam McDougall
Posted by Samson at 12:35 AM No comments: