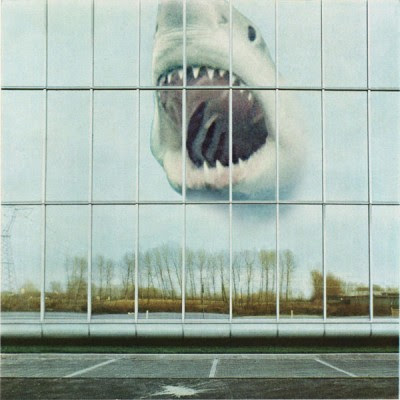 Why a psych-rock outfit from Vancouver deems it necessary to relocate in order to build their next release between Seattle and L.A. is beyond me. The resultant effort Wilderness Heart reeks of discarding their collective identity and reinventing themselves as a more commercially viable product. The thing reads like a recipe: fast, slow, fast, slow, fast, power-ballad to heartfelt soul-searcher, and universality-of-consciousness-themed nonsense.
Black Mountain’s 2008 LP In The Future solidified the group as a bona fide soldier in the ranks of psychedelic rock-n-roll. They were a band that felt self-assured enough to shun the mainstream in pursuit of their own creative freedoms and leftist leanings. In stark contrast, the new record sounds like they’ve gone out, bought beachside property, invested in the stock market and listened to nothing but hard-rock and 1970s fantasy-themed concept albums from their bear-skin couches.
The opening number ‘The Hair Song’ is inoffensive enough but hardly comparable to the explosion of In The Future’s opener ‘Stormy High’. Sadly the recording slides steadily downhill from there with a two, three, four combination that smacks of insincerity in its soaring-eagle clichés and unsurprising sine-wave tempo shifts. We’re granted brief reprieve from the sickening grandeur of the thing with seventh track ‘The Way To Gone’, and then callously thrown back to the OTT theatrics of the title song.
The biggest disappointment here is that I don’t get a sense this is supposed to be funny. What could make for fantastic comedy-rock-opera, complete with exploding buildings and flying angel stage props (a-la Tenacious D), is weighed down by the gravity of belief that Black Mountain bring—they deny the listener the opportunity to laugh. One can only hope this is a minor pot-hole in the street of their story as they’ve shown us much more in the past.
Posted by Samson at 7:01 PM No comments:

Retrospective shows are risky business. At best the artists have the opportunity to reveal the class of early work, the timelessness of their art, to gift the audience a glimpse of a bygone era, and to offer up a small taste of the zeitgeists of formative years. At worst these events can lay bare the shortcomings of the artists’ early work, the un-classicness if you will. At worst they remind the audience of times they’d gladly left behind, of their own past poor judgement, and expose the depths of personal cringe we hide in our dark places. Shihad performing their 1995 album Killjoy fell somewhere in the middle range of this spectrum.
Being at university in Wellington in 1995, I lived in awe of these four lads who had seemingly ripped the lid off the heavy rock business and rocketed to the top of the music world—at least that was how we saw it. Killjoy was a watershed release for the band and it was no surprise that many of the songs stacked up in a contemporary setting. The opening bars of You Again gripped and chafed like sandpaper and the three-punch combo of the aforementioned, Gimme Gimme and The Call proved as immediate as the days they were written. From here the performance waned. Front-man Jon Toogood’s onstage antics were distracting at best and at times he was flat-out irritating. The flagrant posturing and heartfelt earnestness of the bloke made you want to puke at points and the use of backing track during slow-burner Deb’s Night Out was a particular low.
Thankfully the back end of the set revealed the best writing of the album and For What You Burn as an unexpected favourite. Guitarist Phil Knight was always the unnoticed exponent that started this thing rolling and his work this night further solidified this. We were spared the inclusion of any newer material in the encore, which concluded with the frenetic Screwtop from the band’s 1993 debut Churn. All up it was a pretty decent show but hardly enough to redeem Shihad from more recent indiscretions.
Posted by Samson at 6:59 PM No comments: