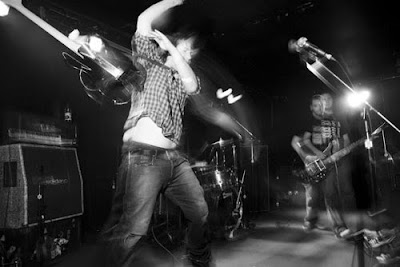 The Nation Blue, Zond & Late Arvo Sons @ the Tote
It happens at least a couple of times a year, the good people at the Tote come up with a bill so well considered that you just know it’s gonna be a banger of a night. This one will be filed as a hum-dinger.
If you’ve caught any of my previous Late Arvo Sons summations it’ll be pretty well clear that I’m a fan. They once again set a new bar for themselves on this occasion with a crisp sound mix and sparked energy levels. With typical Australian surf-pub-garage rock style, guitarist Kent Thomas’ melodies came right off the page. Mark Lording’s vocals growled out from the pit of his gut and the rhythm section of Brett Frost (bass) and Stuart Reynolds (drums) banged out their firmest performance to date.
My new favourite band is Zond. These girls and guys have taken a car crash, injected melody, put it in a blender and unleashed it on our ears. Zond take rock (or post-rock, or noise, or something) to the edge of extreme and then over the brink. They are a must see, but remember your earplugs kids. They ripped my ears new arseholes!
Having caught The Nation Blue at the Spectrum Bar in a previous life in Sydney, I hooked in to guitarist and screamer Tom Lyngcoln’s on-stage psychosis and have never been quite able to shake the memory. Things aren’t much different this night and his fury twists and builds through a set of frustrated forays into the darkest realities of the Australian condition—colonialism, land theft and suburban boganics.
The hand blistering guitar spasms of 2007’s Exile seized charge of the room from the get go. Idiot from 2004’s ‘Damnation’ conjured the strongest crowd response, but it was the title track from said album that drove the nails the deepest—slowed to a crawl with venom. Matt Weston’s bass jags and Dan McKay’s drum fills were set tighter than a cat’s arse as these three brought a taste of proper hardcore back to town.
Posted by Samson at 11:43 PM 1 comment: 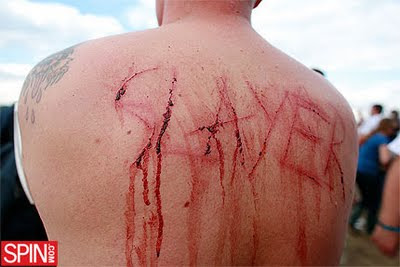 At the top of my Christmas list is a Megadeth sweatband. Perfect for tennis, shopping and in the garden, the Megadeth wristband will take care of all your sweat requirements. I’d pretty much only gone along to see Californian thrash metal gods Slayer, but Megadeth were a hairy surprise. Apparently their moniker is a deliberate misspelling of a term used to describe a million simultaneous deaths in the event of thermonuclear war—cool. Despite sound mix problems driving them from the stage for a spell, they seemed to thrive on the energetic crowd response and played on... and on... and on.
A white curtain dropped to reveal Slayer, full-flight, and the hugest pile of Marshalls you’ve ever seen. Only thing was, it was difficult to make out the song as Tom Araya wasn’t singing. Then he whimpered, “So my voice isn’t holding up too well so I’m not gonna be doing much singing tonight”. And the crowd goes devil-horned whack crazy not really grasping the concept that he meant he wasn’t gonna be singing much this night.
They rip through classics War Ensemble, Chemical Warfare and Expendable Youth and some newies—God Hates Us All a particular highlight—in largely instrumental fashion, but frankly, without Araya’s weapon of a voice, it all lacked punch. And I never wanted to say that. I barely even thought it was possible to use the words ‘Slayer’ and ‘lacked punch’ in the same sentence, but sadly it was true.
As a side-effect, Dave Lombardo’s machinegun drum fills stood out like dogs’ balls and you got a real appreciation for the tight fury of the guitars. It was never going to be enough to pull it off, however, and though Araya made honest attempt to growl out Hell Awaits and bits and pieces of South of Heaven and Angel of Death, the invitation for open mic karaoke towards the death was a bit on the nose. Having been so freakin’ excited for so long to finally see these guys, I have to question whether a call should have been made to cancel the show.
Posted by Samson at 11:34 PM No comments:

Letters From Another Alphabet
Up Yours Records

These guys have been gigging around a heap over the last year or so and it’s been a treat to see them build on a little cache of great songs—canning some, keeping others, growing, polishing. Better still, Late Arvo Sons have had the common decency and sense to get an album out quick-sticks and keep the momentum up. Sure, to do so they’ve virtually had to do it themselves but, with the help of a few friends and plenty of heart, they’ve punched out a ripper of debut.

The biggest difference between Late Arvo Sons’ garage pub-thrash and so many others in town is that vocalist Mark Lording can actually sing. Think about it. There’s nothing flashy here, just honest Australian rock tunes, recorded live and mixed by Melbourne DIY guru and genius type Mikey Young (ECSR, Ooga Boogas etc...). Lording’s vocals steady the raucousness of the band, and while he’s no Frank Sinatra or Antony Hegarty, his simple lyrics sung with authentic gravel add integrity to the sound—he actually brings it from his internals and it shows.

Delicate moments fit with quicker surf tunes and classic pub rock well. What’s come to be the signature opener ‘Skin’ is about as catchy as it gets with call and response style screeching between Lording and guitarist Kent Thomas. Instrumental ‘Buckley’s Hope’ opens things out a bit, meandering ‘Make the Drop’ allows them to cut loose, while the up-tempo closer ‘Northern Nightmare’ steals it.

If Late Arvo Sons’ diversification thus-far is anything to go by, we can expect much bigger things for these four in the future. Tristan Ceddia’s pastel sharky artwork is living proof that a no-budget record need not be packaged shabbily, and the songs here lay testament to the band’s undeniable song writing and aesthetic appreciation. While some bucks and flash recording gear may well thicken up the sound a bit for the next one, Letters From Another Alphabet is a worthwhile sample of solid unsung, unsigned local goodness.
Posted by Samson at 8:49 PM No comments: 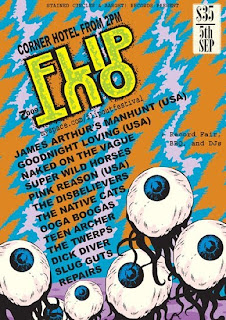 Finally it rolled around, the second annual Flip Out Music Festival, to herald the beginnings of all things festive and the return of that inner-idiot you left behind somewhere around Easter.
Repairs kicked things off with apocalypse keys and thunder percussion. It’d be easy to conceive that at the time of judgement, when the good people are diverted towards the light accompanied by some naff ABBA soundtrack, the bad people will be mustered into a hot and dark spiralling corridor with Repairs grinding out a death march.
The Twerps lightened things up, as they have a fabulous tendency to do, and kicked out some of the finest good-time music of the day. Their sound was bigger on this occasion than I’ve heard before, and some of the roomier numbers were downright goose-bump inducing.
Teen Archer was a contender for the spirit award. Their cover of God’s 1987 smash My Pal proved the highlight, especially given the tech difficulty which resulted in an extremely lengthened version—I could listen to that lick forever.
Dick Diver are the kings and queen of smooth. Every move is pure apple juice. A nice sax cameo enriched their groove while forays into keys added colour to some fine pop rockery and a reprieve from the onslaught.
Tassie’s The Native Cats were the surprise of the day. This two-piece mixed it with any of the larger outfits in both sonic thrust and aesthetic. Peter Escott is one charismatic and captivating fella. His vocals shifted through poetry and rhyming staccato, while Julian Teakle’s bass walked a marathon.
James Arthur’s Manhunt lived up to the hype I’d perpetuated in my brain. A proud ginger, Arthur’s command of American riffery and feedback is astounding. Their dusty desert storm grew and twisted to frenzy. With the beer taking hold (on both myself and the singer), this set proved a turning point of sorts. Everything ramped up a couple of notches and things started to get crazy.
Slug Guts pulled out their A-game and I was glued. Where I found the barking a little tiresome on the album, it captivated on stage and their song structures are unquestionable.
The Disbelievers pulled out some fairly straight but flat-out booty shaking rock-n-roll. My only question of their music would be a slight lack of lead melody, a little more would take great songs to fantastic.
This is where things get a little bit hazy, but it’s safe to say that Goodnight Loving jangled it up a bit with some super-light country pop goodness. Then the Ooga Boogas (on this occasion renamed The Doors due to possible legal problems surrounding their regular moniker) brought the party to the people with atypical good grace and tongue-in-cheek crotch gyration.
From hazy to absolutely hammered, all I can say about Wisconsinite Pink Reason’s set is that it dawdled into a crawl into a trot and around again. There’s an unhinged-ness about this guy that perfectly matched my own (and a fair few other’s I’m sure) state of inebriation at this point.
Super Wild Horses were the only recall from last year’s line up and their progression from then to now is almost unbelievable. Naked on the Vague and Royal Headache were a blur and I’d be making shit up to say I remember a sausage of either of them. But such is the nature of this festival—beer and great music and sausages and beer—you’d have been hard pressed to wipe smiles from dials all day. Once again a scene-less festival about music for people who love it, let’s hope it’s back again next year!
Posted by Samson at 8:45 PM No comments: