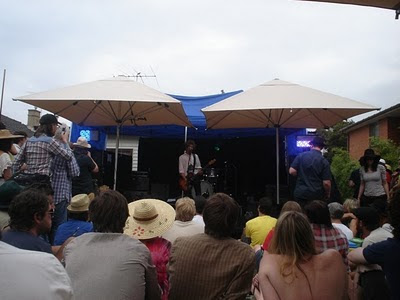 In its ninth year, Applecore, that wee back yard festival in February, has gotten so large they were turning be-eskied would-be punters away at the gate. For those lucky (or smart) enough to have turned up/bought tickets early, the sun shone down on this fabulous sloping Thornbury lawn as floral-dressed ladies and short-shorted boys sipped cider and Dr Tim’s beverages respectively.

The mid-arvo was hot as hell. Well positioned umbrellas and boundary trees saved the building crowd from sun-related mishaps but there was no escaping the heat on stage. New Estate seemed right at home in the high twenties and ripped out a punchy little set of their contorted rock. Local shoegazers Lowtide really captured the essence of the afternoon with extended washy jams. The Ancients brought a new, more diluted rock than pop, attitude to the thing. Laura Jean again brought along the sweet shit and before you knew it you were riding down to High Street for another sixer and a fresh bag of ice.

For mine it was Kim Salmon that set the festival alight. As the imperceptible clouds gently opened for the first of many showers, Salmon steered the crowd through an immaculate grouping of jewels; his good-natured banter winning fans and his song-strength proving one guy alone with his Telecaster can mix it with any four or five-piece in town.

New Zealand’s The Blueness delivered a watery set of grunge-tinged Dunedin deliciousness, while the crowd reaction to Gentle Ben and His Sensitive Side was something of a phenomenon—like with the coming of some prophet all stood, saluted and danced. It may have been the timing, about seven hours into a sun-soaked booze session; or it could have been the rain, which was now coming down in wetting quantities; whatever it was, the mood of the party got set to ‘bring it’ and bring it these Queenslanders did.

A further soaking and associated delay sent this punter home for a hottie and a dry couch. The hardcore may have stuck it out for Screamfeeder, but this camper was happy enough to leg it.

Samson McDougall
Posted by Samson at 5:10 PM No comments: