This Thursday morning at 11am, nine Melbourne metropolitan community radio stations will simulcast, live from Federation Square, for the first time on a digital platform. In Adelaide the following day six stations will be launched onto the digital grid and over the coming months capital city community stations will join them with a regional roll out to come in the near future. Unlike the planned phase-out of analogue television to make way for a purely digital platform, digital radio will be offered as a supplement to current analogue services, which will include text and graphics and allow increased broadcast quality and reach.
These events mark the Community Broadcasting Association of Australia’s successful negotiation of the legal and political minefield that has been the lobbying process. As Australia’s largest media sector (over 350 long-term stations facilitated by around 23,000 volunteers) it was imperative that community broadcasting found its place in the digital realm. In an acronym and jargon-laden process that has taken over a decade to complete, CBAA President and Melbourne metro station PBS Manager Adrian Basso admits there were times when he wondered whether this moment would come.
“I’ve been working in community radio for about 12 years now and even back then there was talk of digital radio,” Basso says, “so it’s nice to get to a stage of actual realisation. Years ago when we were meeting and looking at all the legislation and wondering whether there would be funding or no funding, we were looking at a lot of heavy documentation like contracts and ACCC [Australian Competition and Consumer Commission] deliberations—a minefield of stuff. So to be finally here makes it very rewarding.”
In a broad sense, digital radio is a good match for community broadcasting as it enables an increase of potential output by extending services beyond the time and space limitations of the analogue spectrum. Basically stations will be able to squeeze more of whatever it is they do into the same day and extend their content to a far greater listenership. Where commercial stations will invariably use any technological advancement for the increase of advertising revenue, community radio will actually reap the benefits of pushing programme development and creating new methods of information delivery.
“Whatever platform for media is available it’s critical that it’s accessible and that it allows people to participate and that it’s not just the preserve of commercial interests, or just part of the massive ABC empire,” says Radio Adelaide General Manager Deb Walsh. “There’s a different type of media and range of content that’s produced when people get in there and do it themselves and it can’t be created by other models; it only comes out of the environment where people come in and determine the content themselves.”
There is a commonality of interest in the community broadcasting sector that bonds the dramatically divergent continuum of stations together. Whether using the medium for religious programming, rural information or speciality music, news, information or foreign language shows, the key is communication. Regardless of who you are and what you have to say, community radio allows you to do so in an environment free of the influence of government and the advertising dollar.
Melbourne’s nine and Adelaide’s six metro stations joining forces for the launches will be a public show of solidarity and celebration of the diversity of voice within the sector. Associations between community stations are nothing new, Basso explains, and the realisation of these years of hard work to get community radio up on the digital grid is a huge step in ensuring the continuation of relevant independent voice.
“Simulcasting the nine metro stations is our official way of celebrating the digital launch in a unique way,” says Basso of the Melbourne launch. “The launch itself is a strong indication of the community stations being very collaborative and if you combine the nine stations’ audiences it will be very potent in terms of impact. It’s a strong acknowledgement that we are an important part of the community and that we do say things and talk about things that other broadcasters don’t and won’t and never will.”
The Adelaide launch in the city’s Central Market differs in that will see the six metro stations set up in a circle yet broadcasting separately. There will be doughnuts in the shape of ‘0’s and ‘1’s being handed out by ‘servers’ who will be offering the public a ‘byte’. “We’ve got the corny angle covered,” says Walsh.
In terms of ‘real life’ plans for new services, community radio sits in a unique position in that stations can freely explore new and exciting ways to integrate text and graphics into their information delivery without the burden of having to sell anything. Though initially much of the content available on digital radio will simply match the current content, Basso is excited about the realm of possibilities for new services and believes community radio will lead the charge in terms of finding exciting and innovative ways to make use of the medium. “We’ve always been embracing of new technology and innovative approaches,” he says. “I’m sure each station will do it a little bit differently, [but] the sector’s really used to squeezing as much from as little as possible.”
“We’ve seen it with commercial radio so far that such is the extent of the advertising that the entire radio station becomes an advertisement,” continues Walsh, “they’ve come up with that exciting new model. We’re interested in doing something that on a platform level is very different. What we’re thinking about are different ways of communicating or different uses of radio that aren’t in the set of standard formats that exist on radio. We’re interested in a bit of a reinvention of the medium to take advantage of some of the fantastic advantages of radio like it being free, being inclusive of everybody and being something you can listen to while you’re doing something else. They’re the great advantages that radio has over other media.” 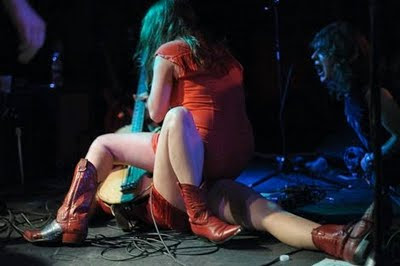 Every now and again there’s a song so feakin’ catchy and brattish and wrong that you can’t stop listening to it in spite of yourself. The title track from Those Darlins’ second record Screws Get Loose is one of these numbers. A wobbly three-chord jangle sets the scene for some vocals so skewed in terms of tonelessness and (lack of) lyrical coherence that you can’t help but fall in love from the first listen. Can’t blame me for what I choose/Screws get loose. Can’t change me after all the abuse/Screws get loose. Can’t blame me for who I use/Screws get loose... genius.
If you had the opportunity to catch them at their recent Meredith or associated shows, chances are you would’ve fallen in love with them already as, undoubtedly, the Darlin sisters Jessi, Nikki and Kelley are the hottest Tennessee spunks in rock’n’roll today. And they fuckin’ know how to bring it. The only thing that sucked about their Meredith slot was, in a stroke of programming moronicism, the festival had them playing virtually last thing on the Sunday while most punters were licking their wounds and stuffing their soiled camp gear into busted bags.
While Screws Get Loose fails to bring the wild abandon of a Those Darlins live show, it acts as a fair taster and doubles as a great driving record. There’s enough variation of tempo from number to number—from $’s warped shadowy school-yard taunt-i-ness to Fatty Needs A Fix’s Ramones-like bounce. The obvious comparison here is with Atlanta’s Black Lips, and you’d have to say at this stage the boys have the edge. But, damn it, if Those Darlins are capable of the song-writing brilliance of the title track here, who knows what infectious delights they’ll bring us in the future.

Samson McDougall
Posted by Samson at 6:59 PM No comments: