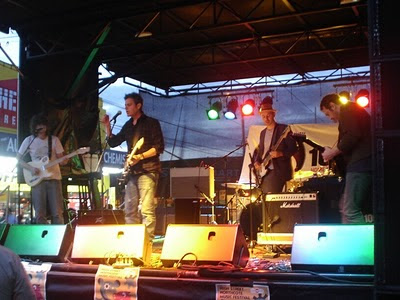 Sand Pebbles are living proof of the healthy state of music in Victoria. They represent a strata of musicians who hold down career-type jobs and dedicate a portion of their free time to the band. That’s not unusual in itself; what is unusual is that they’ve been doing it for about 12 years now and have just released album number five. That’s healthy output by many career-bands’ standards, yet the Sand Pebbles have managed to keep it steadily rolling through the love of creating alone.

In their latest release Dark Magic, Sand Pebbles enter new songwriting territory. Known mainly for pulsing psychedelic jams, this album sees the band stride ably into more folk-inspired terrain. It’s nothing to freak out about if you are a fan of their mind benders, there’s enough of their ‘usual’ sound on the record to ease the transition. But Dark Magic shows experimentation with new sonic thrust, vocal dynamics, and relationships and complexities between guitars.

The band are one of the only around to have members’ ages spanning four decades. It’s a strange dynamic, and odd that they found one another at all, yet it grants the five-piece authority over the entire history of rock’n’roll as direct inspiration. With all five active as songwriters, I was curious as to how they can manage to bring it together at all. “The thing that ties us together is a sense of humour really,” says Bassist and self-professed ‘boss’ of the outfit Chris Hollow, “and the music but when we get together it’s always very funny.”

“Chris and I will be the loudest at expressing our opinions,” says guitarist Ben Michael X, “but someone like AT [Andrew Tanner, guitar/vocals] who’s the wise old silver fox, he just kinda hangs back and ends up getting his own way. Everyone only probably writes one or two decent songs a year. Seriously, all these singer/songwriters who want you to buy ten songs about them breaking up with their girlfriend, fuck that! You end up with two great songs and eight shit ones. You’re better off with five songwriters and you get the best of what they’ve got... We’ll save all the crappy ones for our solo records.”

Putting me on the spot, Hollow asks which song I like best from the release. Scrambling, I tread the diplomatic route and suggest the folky elements as a point of difference from their previous works. I also, thankfully, point out album closer and exploratory dreamscape Blue Eyes In Black & White, for which Michael X and Hollow claim partial pen duties. “Tor [Larsen, guitar/high vocal parts] went to Scotland and did the Highland Way,” explains Michael X of the folkier elements, “which is a walk across Scotland and what 500-years-ago Scottish youth did to become men. While he was doing that he met lots of freaky people living in huts in the Scottish highlands and just got into folk roots. So a lot of his lyrics on this record are traditional folk songs. Long Long Ago, I’m pretty sure is a 17th century folk song.” 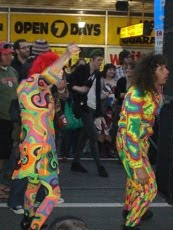 Larsen’s vocals find new legs on this release. As a one-in-a-million shot coupling for Tanner’s voice, Larsen steps out of the shadows on Dark Magic and up into shared lead duties. One of the results of this is single Occupied Europe (Take Me Across The Water), in which Larsen’s singing defies his age, experience and even gender. At a recent performance in which Tanner was unable to play, Larsen stepped into full-blown singing duties for the duration and did not miss a beat. After the show I asked whether he’d found it difficult and he said, “I could tell you that I struggled, but really it was just a lot of fun”. This takes nothing from Tanner’s chops, as follow up to the aforementioned single Another Way To Love reinforces – all dulcet harmonies and building guitars – but Larsen’s exploration of his talents is allowing the band a breadth of freedom to delve into new wells of sonic inspiration.

“The thing about Tor is that he’s just unafraid to be pure, he has that quality,” says Michael X. Hollow adds: “And it made those songs completely different. Most of those songs that night were absolute Andrew staples, so it was like being in a different band. It comes very naturally to him.”

Sand Pebbles had the honour to be asked to play the Stephen Walker benefit show earlier this year alongside Dirty Three, Dave Graney, Gareth Liddiard and more at the Forum. As long-time fans of Walker’s Triple R radio show Skull Cave, the event touched upon what it means to be part of the music community. “We were fans of Triple R before we were musicians, our goal was never to be on Triple M or Triple J,” says Hollow. “It’s a real thrill. When we’re being played [on the station] everyone still texts each other, it’s still a real buzz.”

“Being a music fan, I grew up listening to and loving the Skull Cave, it really informed me,” continues Michael X. “It was the first place I heard the Velvets when I was a teenager and the Stooges and all that kind of shit. When we put out Ghost Transmissions I remember being in a shitty mood at home... I got in the car to go out and get some takeaway and [Walker] played Black Sun Ensemble. It was just one of those great moments in music when you go ‘fuck I’ve listened to this station all my life and it’s turned me on to all these songs that inspired me to write these long jammy kinds of songs’ and then to hear it on that station, I was pumping the air.”

This aversion to the mainstream and passion for music has led the band into a running association with Galaxie 500 and Luna main-man Dean Wareham, which will culminate in Sand Pebbles supporting Wareham in his upcoming tour of Sydney and Melbourne. For Sand Pebbles, to be acknowledged by an artist they admire, be it Stephen Walker, Dave Graney (who offers a fitting passage on Sand Pebbles in his memoir 1001 Australian Nights) or Wareham, far outweighs the prospect of any commercial success.

“I look at 20-year-olds now in their Nirvana tops and think ‘fuck dudes, grunge fucked music! It fucking ruined it and you are a dead-shit bogan for liking that shit’,” says Michael X. “I’ll go on the record as saying that Nirvana are fuckin’ bogans. There was Luna and Galaxie 500 playing these wonderful, great rock’n’roll songs with so much more beauty and depth.”

“As an artist, he’s never let us down,” adds Hollow. “He didn’t let us down in the ‘90s and it was all grunge, he still played music that wasn’t fashionable at the time.”

Posted by Samson at 4:33 PM No comments: